THE NISSAN NV2500 LOADED AND READY TO DRIVE TO MONTANA

This high-roof van with 10 feet cargo space behind the seats, holds about 2000 lbs of household goods, including the moving equipment. Fortunately this load only had about 1600 pounds and we had room to spare!

But the most critical part of this eight-day moving project was getting all the items in the small van. My original survey indicated this load was “pushing” 2000 pounds. There was a huge cost and comfort savings to going with this NV2500 van rather than the next bigger van–a 15 foot box truck. So I had the backup plan of shipping by UPS or DHL if had been two or three final items which would not fit in the NV2500.

PARKED AT A REST STOP IN PADUCAH, TENNESSEE

THE GATEWAY ARCH ARCING OVER THE PARK LIKE A SILVER RAINBOW 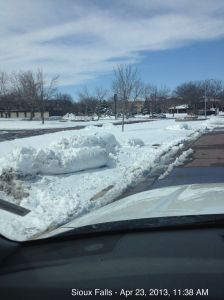 SNOW IN SOUTH DAKOTA! I did this trip in late April 2013. A month before, in March, the customer said there was snow in Missoula, MT that week, but that by the time I got there in late April there was sure not to be snow. In no way did I prepare for snow! I brought a couple light fleece jackets and one heavier jacket, and some light gloves, but didn’t even have a hat, and had no real serious snow wear. When I was near Omaha, Nebraska, I stopped for lunch, and checked my iPhone for weather reports on the area ahead–which was Sioux Falls, South Dakota. On the “Weather Channel” Ap, there was an exclamation mark for Sioux Falls, SD, warning of severe weather. In Atlanta, where I live, a “severe weather” warning might warn of possible tornadoes 75 miles north, or floods 50 miles south. But this warning for Sioux Falls, SD, said “Six Inches of Snow Expected, and Record Lows of 10 degrees! I quickly looked at the map and checked the weather predictions for going on a more southward path through Nebraska rather than South Dakota. The weather predicted in Nebraska was just as bad, and I really wanted to drive through South Dakota.

I grew up in Southern California, and when I saw snow it was because we were going on a special trip to SEE SNOW(!) either to go skiing or just look at the beautiful snowy mountains. When we started driving in the morning, there was no snow on the ground, and there was snow at the ski area, and no snow again as we drove back. On this Montana trip, I DROVE FOR A DAY AND A HALF WITH SNOW ON THE GROUND! — all the way through South Dakota.

SITTING AT THE BAR AT “FRED’S MESQUITE GRILL” IN BUTTE, MONTANA: I had Halibut, Veggies, Tiramisu, an Newcastle Beer. I usually drink wine at dinner rather than beer, but I had two hours of driving ahead of me that night, to get to Missoula, and beer makes me a little less intoxicated. 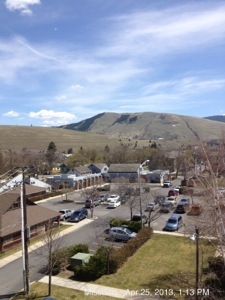 THREE VIEWS ABOVE FROM THE BALCONY OF THE CUSTOMER’S APARTMENT 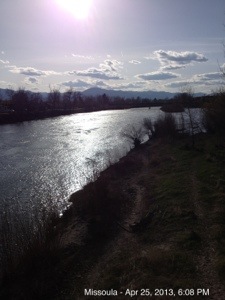 THREE VIEW ABOVE OF THE BEAUTIFUL MISSOULA RIVER